It is preferred to cut most materials with a laser instead of a plasma cutter.

The modern consumer has access to various cutting systems and equipment, all of which are available in a wide range of price points. The vast majority of metal-cutting equipment, on the other hand, falls into either the plasma or laser category when it comes to high output levels.

Plasma and laser cutting machines both use computer numeric control (CNC), which contributes to their high level of precision. Despite this similarity, the two types of cutting machines are best suited for differing kinds of jobs.

We hope that by the end of this article, your options will be more clear to you. We will do this by briefly explaining plasma cutting versus laser cutting and providing you with the information you need to choose the appropriate system for your requirements.

An Overview of Laser Cutting:

In the 1960s, one of the first times lasers were used for industrial uses was when a laser etching device was used to drill a hole in gemstone dies. Diamond dies are a type of wire drawing die made of diamonds that are used for trying to draw a fine wire of hard metals.

This was one of the first times lasers were used for industrial purposes. It wasn’t until the 1970s that other sectors, such as makers of sheet metal and textiles, were able to consider laser cutting as a practical alternative for their operations.

Around the same time, another sector that became interested in laser cutting was the aircraft industry. This was likely because laser cutting can produce dependable and clean cuts.

In the initial periods of laser cutting, the materials had to be cut analogous to cutting them manually, using procedures such as sawing and shearing.

This is because the level of development of computer technology had not yet reached a stage where it could be used to direct cutting.

Laser cutting is gradually becoming one of the most dependable and diverse techniques of metal products that is now accessible. This is because laser cutting increased with the advancement of computers and technology.

What Is Laser Cutting?

The cutting procedure with a laser has been recognized for some time as risk-free, productive, and dependable. High-powered lasers that are controlled by computers are used in the fabrication of laser cutting machines.

The system’s primary component is an optical fiber loaded with elements like thulium, erbium, and dysprosium. When combined with oxygen, nitrogen, or compressed air, fiber lasers can cut through a broad range of metals with high accuracy. Laser cutting machines typically have several functions and may perform various tasks.

The Advantages of Laser Cutting:

The Disadvantages of Laser Cutting:

An Overview of Plasma Cutting:

A nutshell, plasma cutting is a method utilized in the process of slicing through conductive metals, including but not limited to steel, brass, titanium, copper, aluminum, and other similar materials.

Cutting with plasma is not limited to being done in metal fabrication businesses with massive CNC plasma cutting equipment. It is also possible to perform it by hand with the assistance of a plasma torch, also known as a plasma arc, plasma cutter, or plasma cannon, depending on the context.

What Exactly is a PLASMA CUT?

Plasma cutting was created before laser cutting, and it didn’t become widely employed until the 1950s. Before this, the metal was cut using a flame, which is precisely what it sounds like.

However, other metals, such as steel material, aluminum, or copper, could not be cut using a flame, which led to the development of the plasma cutting technique. A supersaturated channel of electrically conductive gas is used in the plasma cutting process.

This gas is a vessel to carry energy from a power supply to the material being cut by traveling via a plasma torch. Plasma cutting is a method that is used to cut metal. Much like a laser cutter, a plasma cutter eventually works by melting the metal to cut through it.

The Advantages of Plasma Cutting:

The Disadvantages of Plasma Cutting:

Comparing the Features of a Laser Cutting vs. Plasma Cutting:

Specific adjustments are necessary to avoid injury using plasma or laser cutters. Plasma cutting devices require individual safety measures for protection against glare, noise, and fumes; nevertheless, this technology does not require specific gear and a safety cage around the entire system like laser cutting machines occasionally do.

In terms of the initial investment, plasma is incomparable to any other option for a metal business, making it the best choice for those trying to get the most outstanding value for their money.

The majority of shop-quality CNC plasma cutting machines can be acquired for between $50,000 and $100,000. This price range is determined by the kind and size of the machine and its features.

The cost of a laser, on the other hand, is significantly higher. While it is possible to purchase a used laser cutter for somewhere in the neighborhood of $250,000, a brand new machine typically costs more than $300,000 and can go as high as one million dollars.

When compared to laser, plasma has a far lower initial investment cost, making it the most cost-effective choice in this comparison.

The Cost of Operation:

Even after accounting for operational expenses like consumables, abrasives, electricity, gas, and periodic maintenance, plasma emerges as the unquestionable victor in this comparison.

Because specific allowances need to be made, the previously mentioned safety concerns also contribute to an increase in the cost of running a laser cutting system.

Performance Comparisons Between Both Options:

This study, which Hypertherm carried out, will likely be of assistance to you if you are still unsure whether plasma or laser is superior for the metalworking applications you have in mind.

ISO ranges performed similarly on mild steel of varying thicknesses in experiments in which X-Definition plasma cutters and fiber lasers were pitted against one another. Even after one thousand stars, plasma demonstrated a lower average edge departure from the perpendicular and decreased variability in edge deviation while cutting through mild steel 6 millimeters thick.

This was the case at speeds chosen to improve quality and productivity. The same findings were obtained using mild steel with a thickness of 12 millimeters. In addition, the plasma machine produced better edge quality, perpendicularity, and hole quality. Plasma also offered exceptional hole quality.

What sets a plasma cutter apart from a laser cutter?

When cutting through metal, a laser cutter uses a laser beam, whereas a plasma cutter uses gas heated to a very high temperature.

How much does it cost to purchase a CNC plasma cutter?

What kinds of things can be created using a plasma cutter?

In almost every metal fabrication business, you’ll find a torch as blindingly brilliant as the plasma cutter it’s attached to. This method, which involves slicing through enormous sheets of metal of varying thicknesses, produces various metal things, including gates, signs, and sculptures.

In the end, cutting using a laser is superior to cutting with plasma for most materials. It is also more exact, producing cuts that are cleaner and with less distortion. However, there are some materials that plasma cutting works better on, so it is essential to consider both possibilities before selecting. 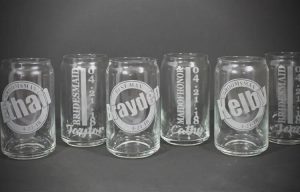 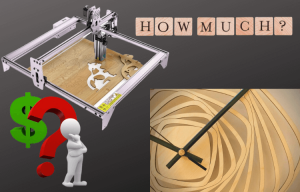 Laser CuttersGuides
How Much Does a Laser Cutter Cost?
November 13, 2021 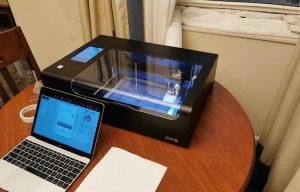